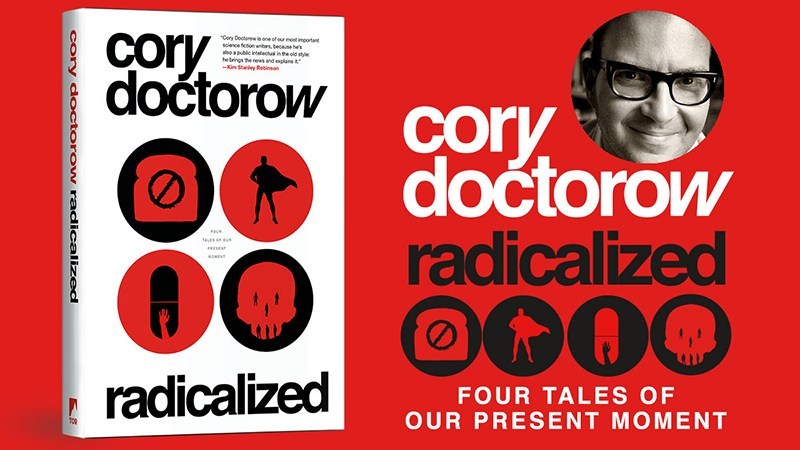 Radicalized is a new collection of four Cory Doctorow stories. Doctorow has been compared to Frederik Pohl because of the social commentary in many of his works. The first story, “Unauthorized Bread,” projects a near future when appliances are all “smart” which in this case mean that users are charged each time they make a slice of toast, or open their fridge, or run their dishwasher. In a “mixed” facility–rich people live on the first 30 floors, poor people live on the upper floors–a refugee named Salima learns how to “jailbreak” her appliances so she doesn’t have to pay the onerous costs. But, that freedom leads to more problems. GRADE: A-

“Radicalized” explores situations where politicians and medical insurance companies deny services to sick citizens…and the citizens die. An online group of radicalized people decide to assassinate the politicians and attack the companies who essentially killed their loved ones for profit by withholding live-saving therapies. GRADE: B

“The Masque of the Red Death” telegraphs its message. Based on the famous Edgar Allen Poe story, Doctorow poses a near future where a wealthy investor named Martin projects a complete collapse of the United States. Martin builds a hidden desert retreat he calls The Fort and stocks it with guns, ammo, food, and antibiotics. He invites thirty friends to join him when the catastrophe hits. And just as Martin predicted, the riots begin and the Government falls. Martin and his friends think they’re safe inside The Fort, but even smart people make mistakes…and each mistake means death. GRADE: B

7 thoughts on “RADICALIZED By Cory Doctorow”