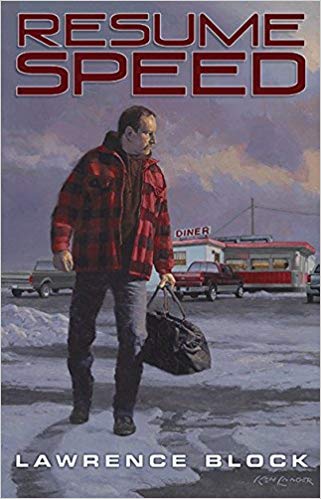 Lawrence Block’s Resume Speed was published by Subterranean Press back in 2016 but I only got around to reading it now. A man who calls himself “William Thompson” gets on a bus in  Galbraith, North Dakota and heads for Spokane, Washington. But when his bus stops in Cross Creek, Montana Thompson notices a HELP WANTED sign outside a diner. Thompson applies for the job and gets it. Lawrence Block carefully records Thompson’s steps in settling in to the community. Thompson gets a library card and ends up sleeping with the librarian. After a few months, Thompson has enough money to buy a used car. Life is good. But…Thompson’s past is always close behind which is why Thompson has to guzzle whiskey each night to chase his demons away. If you’re in the mood for a stark tale of naturalism, give Resume Speed a try. Are you a fan of Lawrence Block’s work? GRADE: B