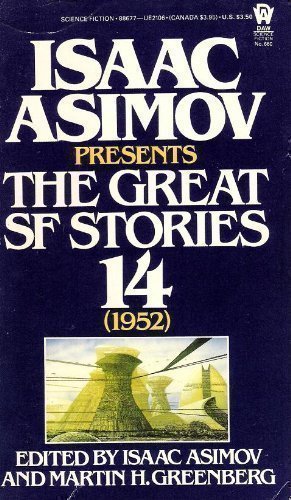 In the Introduction to The Great SF Stories #13 (1951) , Martin H. Greenberg mentions that two novellas–“The Fireman” by Ray Bradbury and “Beyond Bedlam” by Wyman Guin–would have been included but their length made that impossible. In The Great SF Stories #14 (1952), Greenberg cites “Surface Tension” by James Blish, “Bring the Jubilee” by Ward Moore, and “Baby is Three” by Theodore Sturgeon as novellas worthy of inclusion, but barred because of their length. ThE stories that did make this volume are mostly first-rate. Ray Bradbury’s classic “The Pedestrian” sets the tone. My favorite story in this anthology is F. L. Wallace’s wonderful “Delay in Transit.” GALAXY dominates the selected stories the way ASTOUNDING SCIENCE FICTION dominated The Great SF Stories volumes from the 1940s. Asimov and Greenberg’s choices for this book include veteran writers like Edmond Hamilton and new writers like Philip Jose Farmer. That’s one of the strengths of this series. GRADE: A