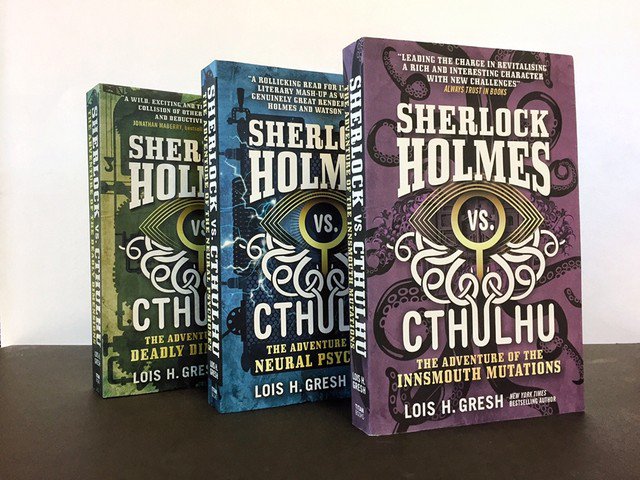 Sherlock Holmes vs. Cthulhu: The Adventure of the Neural Psychoses (2018) sends Holmes and Watson to London’s drug dens to investigate mysterious devices called Eshockers which create addicts for electro-stimulation. Once again, Professor Moriarty and his gang of killers meddle with forces beyond this world and their understanding. Two women who are critical to summoning the sleeping Cthulhu–Amelia Scarcliffe and Maria Fitzgerald–fall into Moriaty’s clutches. Only Holmes and Watson can stop the Earth’s destruction. GRADE: B

In Sherlock Holmes vs. Cthulhu: The Adventure of the Innsmouth Mutations (2019) Holmes and Watson travel to America to fight the forces of Dagon, a creature who rules the waters around Innsmouth, Massachusetts. Moriarty attempts to channel the awesome powers of Amelia Scarcliffe and Maria Fitzgerald to create powers beyond human conception, but the incredible presence of Cthulhu comes into play. If you’re in the mood for excitement, thrills, and over-the-top battles with extraterrestrial creatures, the Sherlock Holmes Vs. Cthulhu series will cause you to scream for more! GRADE: B