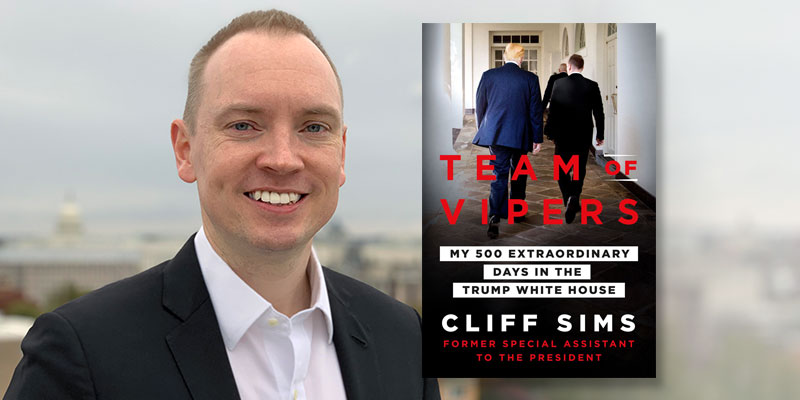 Cliff Sims, former Special Assistant to the President, worked in the hellhole that is the Trump White House for a year and a half–an eternity by current Trump HR standards. Sims writes, “Lincoln famously had his Team of Rivals. Trump had his Team of Vipers. We served. We fought. We brought our egos. We brought out personal agendas and vendettas. We were ruthless. And some of us, I assume, were good people.”

This is another insider’s story of Life inside the Trump White House with its daily chaos, treachery, and deceit. I found it sad and depressing. So much time and energy is being wasted with one clique warring against another clique in the West Wing. Staff pursues personal interests and ignore growing national problems. Meanwhile, the country–and the world–seems to be spiraling out of control. American leadership in International Affairs is nowhere to be found. Terrorists and crazies are emboldened by the Power Vacuum. From the grim picture of the Trump White House that Cliff Sims presents, we’ll be cleaning up this mess for decades. GRADE: B
TABLE OF CONTENTS:
AUTHOR’S NOTE xiii
Introduction: Election Night xiii
1. Slow Climb Aboard the Trump Train 1
2. The Deplorables 15
3. Fight or Flight 33
4. Size Matters 51
5. Early Days in the “Dump” 67
6. Twenty-one Days on Top of the World 91
7. The Professionals 107
8. Killers 126
9. The Mooch Is Loose 147
10. Better Angels 178
11. A Tale of Two Generals 204
12. Cut Cut Cut 227
13. Frenemies of the People 358
14. Black Eyes and Broken Glass 283
15. Disposable 307
Epilogue: Outside the Bubble 339
Acknowledgements 345
Index 347

12 thoughts on “TEAM OF VIPERS: MY 500 EXTRAORDINARY DAYS IN THE TRUMP WHITE HOUSE By Cliff Sims”