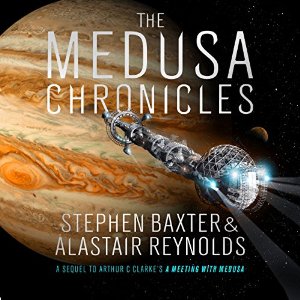 Back in 1972, Playboy published “A Meeting With Medusa,” a novella by Arthur C. Clarke. It’s the story of an exploration mission to Jupiter. Cyborg astronaut, Howard Falcon, discovers alien life on Jupiter in that classic story. Alastair Reynolds, just a youth back in 1972, was electrified by “A Meeting With Medusa” and would later pursue a Ph.D. in astronomy. Years later, Stephen Baxter and Alastair Reynolds exchanged a series of emails where they came up with the idea of exploring the Jupiter that Arthur C. Clarke describes. The result is The Medusa Chronicles. Sadly, I have to report mixed results. Jupiter is still the star of the book, but Baxter and Reynolds brew a Human Vs. Machine plot that wears thin after 400 pages. Sometimes you can’t go home to Jupiter again. GRADE: C+

24 thoughts on “THE MEDUSA CHRONICLES By Stephen Baxter & Alastair Reynolds”