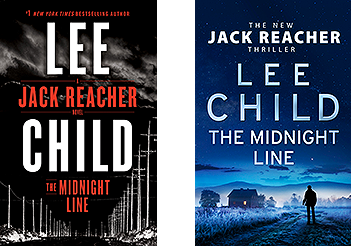 Lee Child’s The Midnight Line is the 22nd book in his long-running Jack Reacher series. As usual, Reacher is just wandering around looking for trouble. He finds a West Point graduation ring in a pawn shop in Wisconsin. Reacher immediately wants to know how it got there and who it belonged to (Reacher is a West Point graduate, too). The search takes Reacher to a criminal called Jimmy Rat. After Reacher beats the shit out of Jimmy Rat’s seven biker friends, he’s off to South Dakota to follow the next clue. Much of The Midnight Line is set in Wyoming. The Midnight Line isn’t as good as Make Me, but it’s about as good as Night School. Are you a Jack Reacher fan? GRADE: B

15 thoughts on “THE MIDNIGHT LINE By Lee Child”