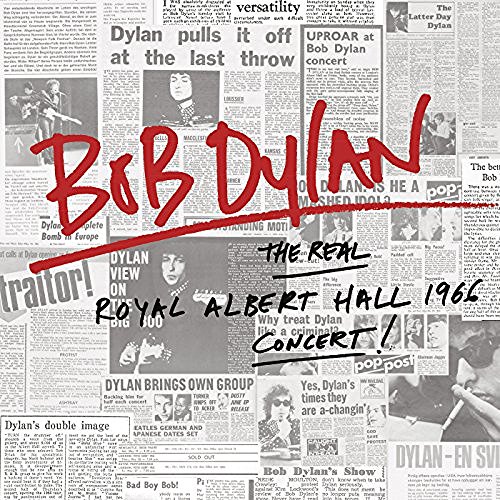 Nobel Prize winning performer Bob Dylan toured England back in 1966. The concert at Royal Albert Hall achieved legendary status. Bootleg recordings circulated for decades. But now, through the magic of greed, we have an “offical” or “real” tape of that 1966 concert at Royal Albert Hall. The acoustic portion on Disc 1 is remarkably well-recorded. Disc 2’s sound quality varies. These two CDs are #27 and #28 of the 36-CD set released a couple years ago. If you’re a Dylan completest, then this is a must-buy. But I suggest you skip it. GRADE: B
TRACK LIST:
Disc 1
She Belongs to Me
4th Time Around
Visions of Johanna
It’s All Over Now, Baby Blue
Desolation Row
Just Like a Woman
Mr. Tambourine Man
Disc 2
Tell Me, Momma
I Don’t Believe You (She Acts Like We Never Have Met)
Baby, Let Me Follow You Down
Just Like Tom Thumb’s Blues
Leopard-Skin Pillbox Hat
One Too Many Mornings
Ballad of a Thin Man
Like a Rolling Stone