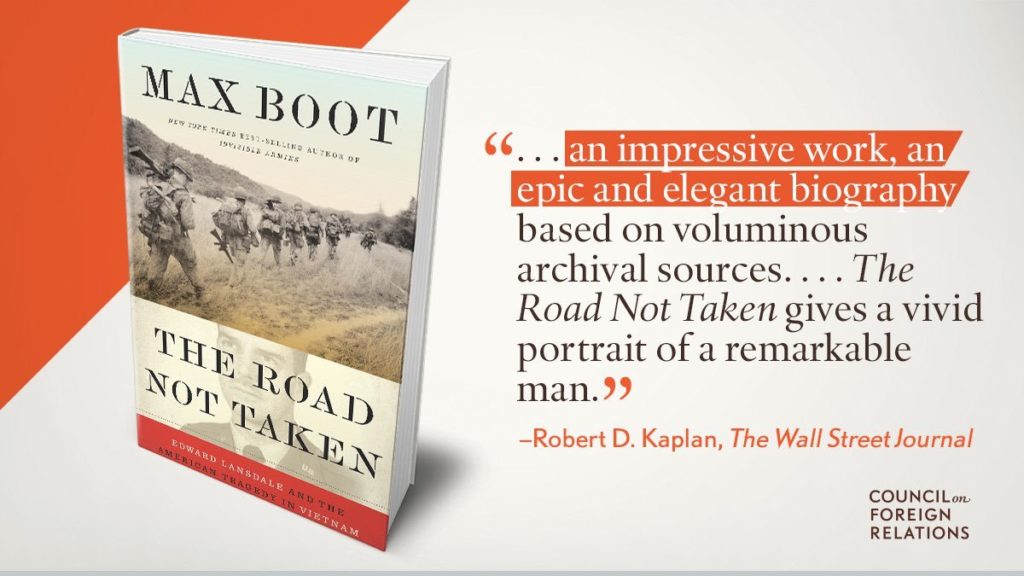 We’re still living with the effects of the Vietnam War. Max Boot’s The Road Not Taken: Edward Lansdale and the American Tragedy in Vietnam explores the possibility that the war in Vietnam could have been avoided if Edward Lansdale’s advice had been taken. Lansdale was a CIA operative who managed to stop a Communist group in the Philippines with an anti-insurgent strategy. Lansdale believed in political and social reform at the village level to build support for the Government.

Max Boot does a great job of setting the scene in the Philippines (including Lansdale’s long-term affair with a local woman) where Lansdale and the CIA learn how counter-insurgency techniques work. With that success, Lansdale and others are recruited for the effort to stop the Communist threat in Vietnam. Of course, Vietnam was an entirely different problem. Massive government corruption, political instability, and American military ineptness mixed with politics made the situation a giant mess. And Lansdale’s sound advice was ignored.

I’ve read a couple histories of the Vietnam War, but The Road Not Taken shows events through the activities of Lansdale and other operatives at the local level. Instead of the macro view, this book shows you the micro view of the events that lead to disaster after disaster. If you’re interested in a different approach to our involvement in Vietnam, I highly recommend The Road Not Taken. GRADE: A
TABLE OF CONTENTS:
Maps xii
Dramatis Personae xv
Prologue:The Day of the Dead: Saigon, November 1-2, 1963 xxiii

Afterword: Lansdalism in the Twenty-First Century 599

12 thoughts on “THE ROAD NOT TAKEN: EDWARD LANSDALE AND THE AMERICAN TRAGEDY IN VIETNAM By Max Boot”