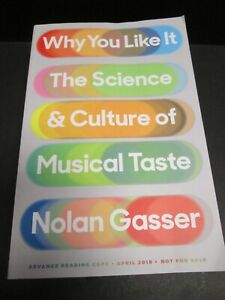 Nolan Gasser is a composer, pianist, and musicologist. He’s also the genius behind the Music Genome Project that powers PANDORA Radio. Nolan developed his algorithm back in the early 2000s so that listeners to PANDORA could listen to music that appealed to their tastes. In Why You Like It, Nolan explains how music taste works. He also shows how he designed and help build a system that would benefit the millions of listeners of PANDORA to find the music they wanted.

Although the story of PANDORA is fascinating, Nolan’s book goes beyond the story of founding an Internet company to an analysis of music itself. I found some of Nolan’s discussions a bit technical for me, but those of you who play an instrument and can read music will be able to make more sense of what Nolan is saying. However, I did appreciate Nolan’s analysis of why people like “Proud Mary” by Credence Clearwater Revival.

37 thoughts on “WHY YOU LIKE IT: THE SCIENCE & CULTURE OF MUSICAL TASTE By Nolan Gasser”