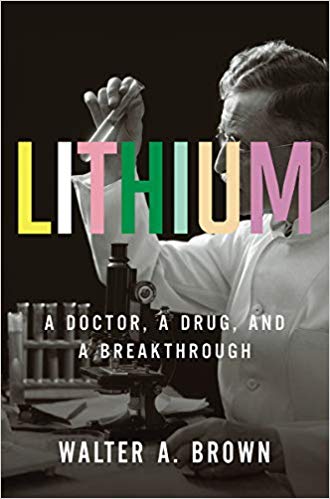 In 1949, Australian doctor John Cade, working alone and in obscurity, discovered that lithium–a natural occurring substance like salt–could relieve the symptoms of manic depression (aka, bipolar syndrome). Cade published his work, which was mostly ignored, and for decades a treatment for one of the worst mental health problems went unnoticed.

One reason for lithium being ignored is that it wasn’t a drug that pharmaceutical companies could make Big Money on. You can get lithium at your local health food store for a few bucks. Meanwhile, people suffering with manic depression or bipolar syndrome where given expensive electroshock treatments and psychotropic drugs that didn’t work well. In the 1970s, Norman Lear’s Maude (based on his wife) featured an episode where Maude takes a drug that helps her combat her depression. The Network censors would not allow the word “lithium” to be spoken (p. 147), but Lear’s wife was on it at the time and found great relief from her mood swings. A couple decades later, Homeland’s Carrie Mathison (played by Claire Danes) struggles with her psychotic problems and only finds relief with lithium (p. 148).

Three years ago, I started to experience vague but persistent anxiety and troubled sleep. I could find no logical reasons for these conditions. At that time I read an article in the New York Times about lithium. Regions with high lithium levels in their drinking water–Texas, Japan, Austria, Greece (p. 183)–had lower levels (up to 50% decrease) in suicide rates. And lower rates of manic depression. So I bought a bottle of lithium and started taking it. Within a week, my vague anxiety disappeared. I started sleeping better and longer. My blood pressure went down. Placebo Effect? Possibly. But I returned to normal and I’ve continued to take lithium daily ever since. Walter A. Brown’s Lithium explains why my mental health and the mental health of thousands of others improved. GRADE: A
TABLE OF CONTENTS:
Introduction vii
1. Manic-Depressive Illness, A Brief History 1
2. The Naturalist 29
3. Lithium 47
4. Breakthrough 61
5. Aftermath 89
6. Prophylaxis Rex 127
Epilogue 165
Acknowledgments 191
Notes 193
Selected Bibliography 205
Index 213

10 thoughts on “LITHIUM: A DOCTOR, A DRUG, AND A BREAKTHROUGH By Walter A Brown”