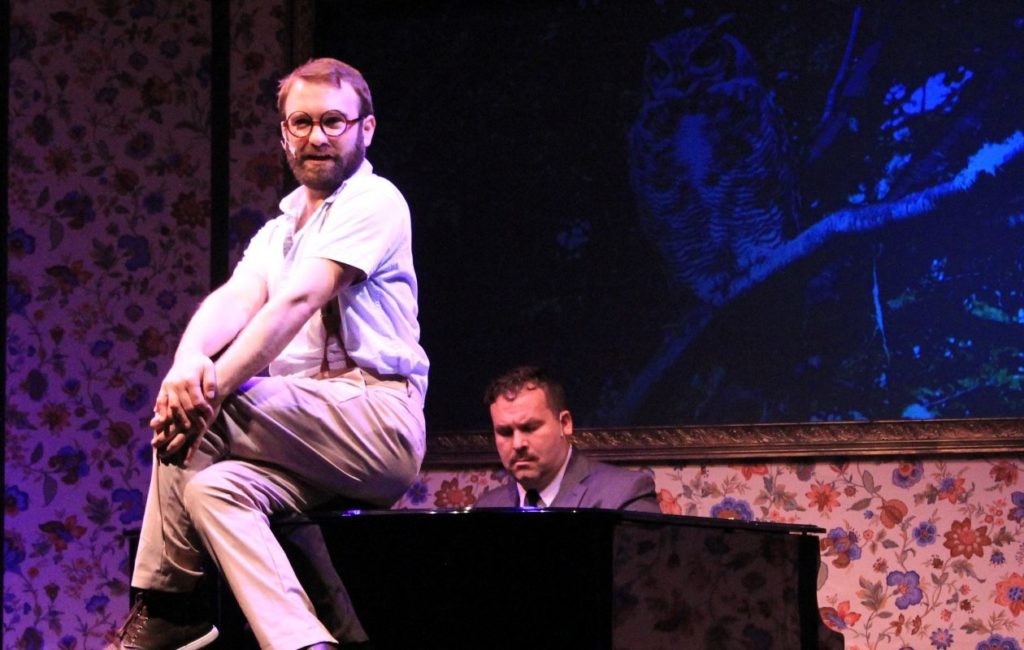 Murder for Two is a hilarious musical with a mystery plot. Famous mystery writer Arthur Whitney is murdered and the motive seems to be the secrets that were to be exposed in Whitney’s new book, All Them Bananas. Philip Farugia plays “The Detective” who has a very checkered past. Joseph Donohue III plays “The Suspects” including Whitney’s wife, Dahlia Whitney, Whitney’s neighbors, Whitney’s psychiatrist, a beautiful ballerina, a boys chorus, Whitney’s niece, and a fireman. Donohue projects the antic energy of Robin Williams as he cycles through the menagerie of kooky characters. Farugia tries to project confidence during the murder investigation, but he’s dogged by his Past. Both actors take turns playing the piano and singing some silly lyrics. If you’re in the mood for a mashup of a mystery and a screwball comedy, Murder for Two is your ticket. GRADE: B+
SONG LIST:
ACT ONE:
1. “Prelude”
2. “Waiting in the Dark”
3. “Protocol Says”
4. “Dahlia Whitney”
5. “A Perfectly Lovely Surprise”
6. “Murray & Barb Flandon”
7. “It Was Her”
8. Timmy, Yonkers, & Skid
9. “A Lot Woise”
10. “Steph Whitney”
11. “He Needs a Partner”
ACT TWO:
12. “Barrette Lewis”
13. “So What if I Did?”
14. “A Friend Like You”
15. “Henry Vivaldi”
16. “Process of Elimination”
17. “Steppin’ Out of the Shadows”
18. “Finale (I Need a Partner / Protocol Says)”
19. “Finale Ultimo (A Friend Like You)”

10 thoughts on “MURDER FOR TWO, A MUSICAL By Kellan Blair & Joe Kinosian”