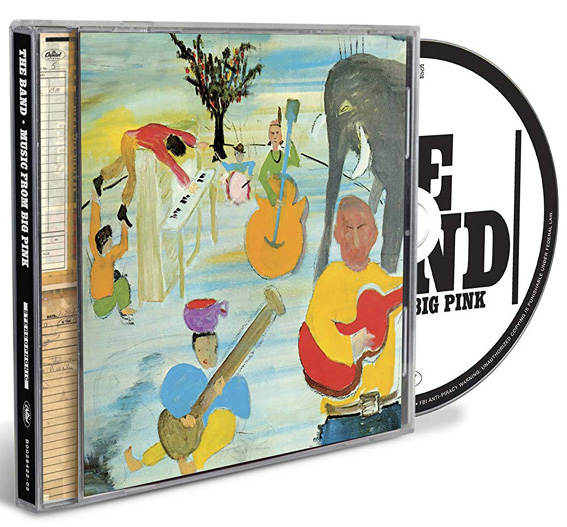 I bought Music From Big Pink 50 years ago in a long vanished record store in Niagara Falls, NY. Of course, it was a vinyl album. My first rock concert was a 1965 performance by Bob Dylan. Some of the performers in Dylan’s backup band later formed The Band and released this unusual album. Music From Big Pink isn’t your typical Rock & Roll album. The songs vary from folky tunes like “Long Black Veil” to uncatagorizable songs like “Chest Fever.” At the time, I had nothing in my meager record collection (maybe a dozen vinyl albums in 1969 and a couple dozen 45s–remember them?) that sounded like the music The Band put on the original 11 tracks.

This 50th Anniversary Edition has been remixed and remastered and sounds great! The Bonus Tracks features some outtakes and alternate versions which are fun to listen to. Were you a fan of The Band? Do you have a favorite song of theirs? GRADE: A
TRACK LIST:
1. Tears Of Rage
2. To Kingdom Come
3. In A Station
4. Caledonia Mission
5. The Weight
6. We Can Talk
7. Long Black Veil
8. Chest Fever
9. Lonesome Suzie
10. This Wheel’s On Fire
11. I Shall Be Released
Bonus Tracks:
12. Yazoo Street Scandal (Outtake)
13. Tears Of Rage (Alternate Take)
14. Long Distance Operator (Outtake)
15. Lonesome Suzie (Alternate Take)
16. Key To The Highway (Outtake)
17. I Shall Be Released (A Cappella)