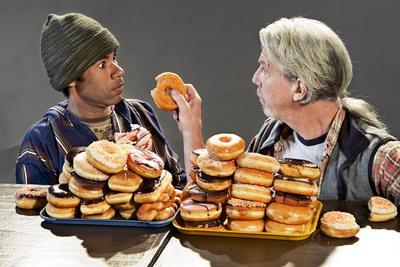 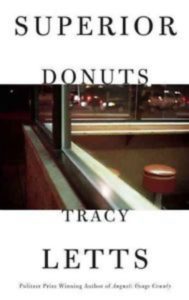 After reading Tracy Lett’s August: Osage County (and watching the movie), I decided to read more of Tracy Letts’s plays. To my surprise, I discovered Superior Donuts (2010). I’ve never watched the TV version starring Judd Hirsch and Jermaine Fowler. But after reading the play, I know the TV series has to be a very sugar-coated version of the original production. Then Superior Donuts was put on a local stage by a regional drama group so Diane and I got to see the play performed.

Aging hippy Arthur Przybyszewski arrives at his failing Uptown Chicago donut shop (a Starbucks has just opened across the street) and finds someone has broken his window and spray-painted PUSSY on the wall. Franco Wicks, an African-American college dropout, shows up and applies for a job. Arthur reluctantly agrees. Their relationship swirls around the problems and secrets each man hides. Issues of race, class, and personal decisions power this play.

Where August: Osage County explored a dysfunctional family, Superior Donuts explores the highs and lows of personal relationships with some humor thrown in. I enjoyed seeing a performance of Superior Donuts. GRADE: B+

I also read Tracy Letts’s Bug (2006), a story about paranoia and conspiracy. Not to my taste. Bug became a movie with Ashley Judd, Michael Shannon, and Harry Connick, Jr. It was directed by William Friedkin. I haven’t seen it…nor want to. GRADE: C-