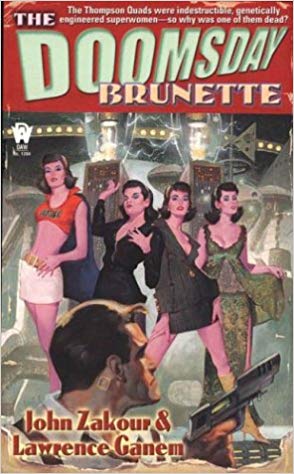 John Zakour’s The Doomsday Brunette features Zachary Nixon Johnson, the last private detective on Earth. The story is set in 2057 after extra-terrestrials have introduced advanced technologies. Zachary Nixon Johnson discovers the extent of the new technology with this case involving the Thompson Quads, four women created with modified DNA that makes them smarter, more sexy, and more powerful than the average human. The Quads are social icons with constant media attention (think the Kardashians times 10!). Ona Thompson calls Johnson at 3 A.M. asking for help. Johnson shows up and finds Una with her sisters Twoa and Threa…and the dead body of Fora Thompson. How could a killer murder a woman as powerful as Fora Thompson? Who would target one of the most popular women on the planet? And why?

The Doomsday Brunette blends Science Fiction tropes and mystery elements into a light, fluffy concoction just perfect for Summer Reading! You can read reviews of John Zakour’s The Plutonium Blonde here and The Radioactive Redhead here. GRADE: B

9 thoughts on “THE DOOMSDAY BRUNETTE By John Zakour”