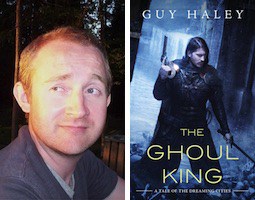 The Ghoul King (2016) is the second book in Guy Haley’s “Dreaming Cities” series. The first book in the series, The Emperor’s Railroad, was published by TOR Books in 2015. You can read my review of The Emperor’s Railroad here. In this dystopian future, civilization has been shattered. Quinn, a knight armed with a sword and a pistol, is on a quest that brings him into contact with a rebel group. Quinn agrees to help the group in return for the location of his horse which was stolen from him. The rebel group’s objective involves retrieving forbidden technology from an underground facility. However, the facility is swarming with ghouls. And, as you might have guess, Quinn has to take on the Ghoul King in order to accomplish the mission.

If you’re in the mood for quick, exciting reads I recommend both The Emperor’s Railroad and The Ghoul King. There are still plenty of secrets for Guy Haley to reveal. GRADE: B (for both books)

10 thoughts on “THE GHOUL KING: A TALE OF THE DREAMING CITIES By Guy Haley”

Leave a Reply to Sergio (Tipping My Fedora) Cancel reply