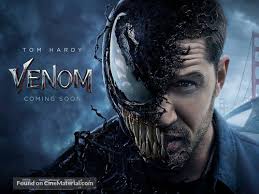 If you had a star like Michelle Williams in your film, wouldn’t you give her something to do? Director Ruben Fleischer, more interested in the alien Symbiote who calls itself Venom, reduces Michelle Williams’s role to “girlfriend” of Tom Hardy. Tom Hardy plays the edgy San Francisco investigative reporter, Eddie Brock, who is obsessed with telling the Story. When Brock antagonizes billionaire industrialist Carlton Drake (Aiz Ahmed)–a darker shade of Elon Musk–his TV network fires him. Brock is just scraping by when one of Carlton Drake’s scientists, Dr. Skirth (Jenny Slate), tells him that Drake is feeding people to alien organisms. Dr. Kirth smuggles Brock into the secret lab where the aliens are being kept and…Brock gets infected. And dangerous.

Carlton Drake wants his alien returned so he sends a small army to bring Brock and the Symbiote back. Plenty of havoc, chases, and violence result. Venom isn’t in the league of The Avengers: Infinity War but Tom Hardy and Michelle Williams do their best to make this movie entertaining. GRADE: B-